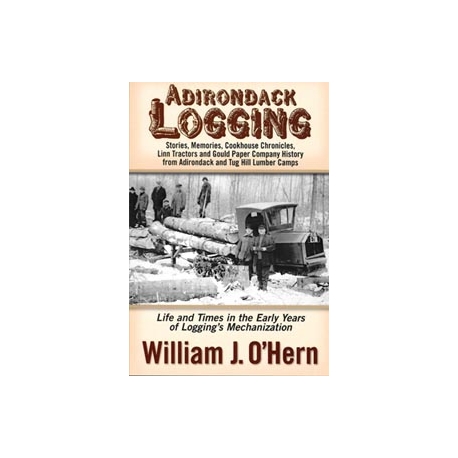 Adirondack Logging Logging and lumberjacks have long been important parts of American history, but there has been little documentation about lumber activities with early gas and diesel-powered machinery.

The Adirondack Mountains are rich in legend, folklore, tradition - and at one time great virgin stands of the finest softwoods and hardwoods in northeastern America. The imperially tall, straight white pine, the northern black and red spruce, the white cedar, balsam fir, basswood and hemlock were all softwoods that made their way to the mills, riding the rivers declared public highways for floating logs. It was not until roads were built and mechanical logging equipment of the early twentieth century came along that the old-style horse-drawn methods were replaced. In the1920s, harvest of the surviving virgin stands of weighty hardwoods, maple, beech, birch, and cherry began.

ADIRONDACK LOGGING portrays the timber logging lives of lumberjacks in the "Glory Years" following the introduction of Linn tractors. There are interviews with loggers, remembrances of lumber camp life, accounts of river drives, the passing of old-style logging with horses, recollections of yesterday's lumberjacks, and stories that accompany appetizing recipes any cook could prepare and serve today. Rare photographic images capture the scenes once common around lumber camps, centers of the logging industry built exclusively for the famed lumberjacks. The Sky Pilot collection illustrates how the Christian faith was brought to back-country camps and how integral it is with today celebrated NYS Woodsmen's Field Day.

In the creation of this book, author William J. O'Hern has gathered a wealth of logging memorabilia, images of early mechanical logging equipment, old-time logging scenes and personal recollections of life in the lumber shanties. ADIRONDACK LOGGING not only details an informal history of the now legendary past life of old-time logging with Linn Tractors, but takes you into old-timers' lives and the renowned cook shack.

ADIRONDACK LOGGING is a contribution to logging history whose value is beyond measure, and is destined to become a favorite among any collection of Americana, with its rare photographic documentation and successful use of humor.

Signed by the author