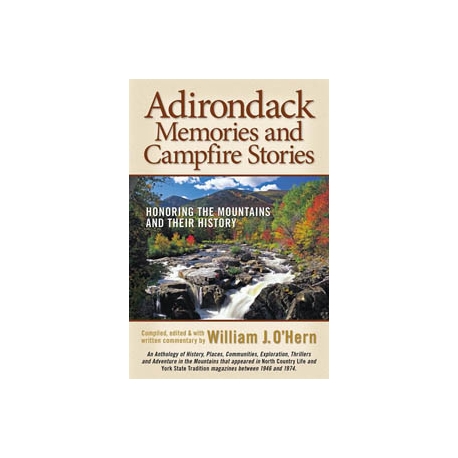 Adirondack Memories and Campfire Stories If you've spent any time rambling New York's north country roads, you may have wondered how Lake of the Broken Heart got its name, or how little towns like Schroon Lake and Chateaugay and Redford came to be before the north became a tourist haven. Where was that narrow-gauge railroad your grandfather told you about? What about the steamboats? Maybe you're still holding out for the possibility of a sea serpent in Lake Champlain, or hoping you'll chance upon a legendary lost silver mine while you're out enjoying a hike in the balsam wood.

This is the sort of interesting and sometimes unusual information that readers of Adirondack Memories and Campfire Stories will find fascinating. O'Hern has compiled first-hand stories from an invaluable series of little quarterly magazines that native Adirondack archivist, historian, and folklorist George Glyndon Cole published from 1946-1974. Few complete collections now exist, in less than a handful of North Country libraries, but back then readers eagerly anticipated each new issue. Some readers will remember reading North Country Life, later called York State Tradition, from cover to cover. It was exciting indeed to read about one's own rural region, especially when the articles came straight from the pens and hearts of one's neighbors.

High school teacher G. Glyndon Cole took a position at Plattsburgh State University College, in the Special Collections at Feinberg Library. Throughout his professional years, Cole operated a one-man publishing house dedicated to preserving the rich tradition of the Adirondack North Country. Cole's regional magazine was a forerunner of today's popular Adirondack Life, and the 113 special historical issues are now sought after by history buffs.

As O'Hern explains it, "The less contact one has with urban society, the more idiosyncratic one's character becomes. This is true with communities as well as with people." Adirondack Memories and Campfire Stories teems with eccentric characters and unique places that distinguish New York's north country.

As in other rural areas of America, early north country folks were involved in the business of survival through farming, logging, hunting, trapping, and an almost perpetual preparation for long winters. The country store, with its traditional potbelly stove, provided a place to socialize, exchange information, and tell stories. In the summertime, evening campfires served the same purpose. Old salts loved to "put one over" on listeners. Storytellingâ€”which O'Hern calls a "universal thread" that ties humanity together from its beginning to the presentâ€”is the focus of the second part of Adirondack Memories and Campfire Stories.

Here you'll find everything from fireside legends to tall tales to weird beliefs of early north-country folks. Did you know that Rouse's Point was a champion tale-spinning town, or that a soldier's ghost haunts the Champlain Valley? Are these tales trueâ€”at least partly? It's all in the telling, and the reader must decide. At any rate, they make for amusing and sometimes electrifying reading, and if you pass some of these tales along at a future campfire, you'll be part of a long and important tradition.

Author William "Jay" O'Hern is to be admired for collecting the articles and stories that comprise Adirondack Memories and Campfire Stories, for they might otherwise be lost to time as more and more copies of Glyndon Cole's magazines disappear. His book is an illuminating read and a valuable resource that belongs on the shelf of everyone who loves Adirondackana.

Signed by the author