> Our Books>Under an Adirondack Influence - Paperback 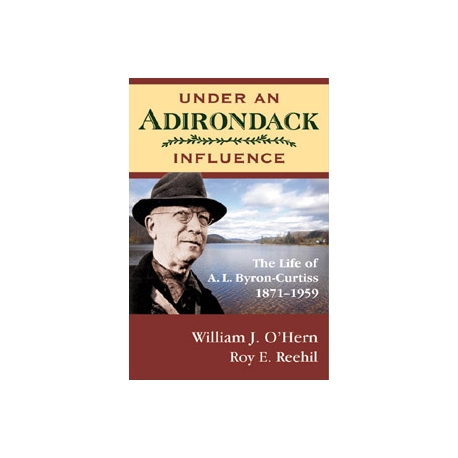 Under an Adirondack Influence - Paperback

Signed by the Authors. Also available in hard cover - $29.95

Paperback, 6" x 9", 352 pages and over 60 Vintage Photographs. Includes an Index and Bibliography

At age 21, Byron-Curtiss was sent to run an Episcopal Mission in Forestport, NY, spending a year there that changed his life. It was 1892. Once he started writing about the people he befriended there, a frontier doctor, lumberjacks, guides and tavern-keepers, he never stopped writing.

He purchased a lakeside cabin for $15 in 1901 and was soon dubbed "The Bishop of North Lake" by the local guides and fishermen he tramped the countryside with.

During his second assignment, in Rome, NY, he finished his first book, the biography of the legendary woodsman Nat Foster, one of the first settlers of Old Forge, and allegedly the model for James Fenimore Cooper's Hawk-eye character in The Last of the Mohicans.

Byron-Curtiss enjoyed sixty seasons of hunting and fishing at his beloved camp on North Lake and recorded his most memorable adventures in camp journals. His stories, tall tales and nature observations punctuate an intriguing life. He is at different times either a friend or foe to Conservation Officers and the Adirondack League Club. He has stints as a barge operator (ferrying lumberjacks and supplies), a lumber camp bookkeeper and a reservoir gatekeeper. His camp log books celebrate a rustic existence where laughter and fish were plentiful. They also reveal his vulnerabilities when tragedy strikes as often it did.

The Reverend was a wise and courageous man who was ahead of his time. He was as comfortable in Manhattan as he was in the backwoods and as friendly with bishops as he was with lumberjacks and guides. His experience has touched readers and his story, and the history that accompanies it, should not be forgotten.

From the Back Cover:
A. L. Byron-Curtiss first traveled to the Adirondacks in 1892 at age 21 to take over a wilderness mission that changed his life. During the next sixty years, spanning two world wars, prohibition and the Great Depression, he wrote about everything important to him: his family, his outdoor adventures, the colorful North Country characters he befriended and the tall tales they shared around a campfire. He wrote about nature, history, folklore, conservation, philosophy, world affairs, his greatest joys and most unnerving tragedies. He brought passion and humor to all his endeavors, as a father, a fisherman, a preacher, a drinker, a social activist and a scofflaw. Through all his life, the unofficial "Bishop of North Lake" displayed an unshakable faith, uncommon wisdom, and an everlasting love for life in the Adirondacks.

Signed by both the authors.